Bobby Doerr, the Hall of Fame second baseman dubbed the “Silent Captain” of the Boston Red Sox by longtime teammate and friend Ted Williams, has died. Doerr died on Monday October 13 at the age of 99. He played on the same Red Sox team as Moe Berg in the 1937, 1938, and 1939 seasons and was one of the players Moe coached on the Red Sox in the 1940 and 1941 seasons.

In the statement released by the Red Sox on Tuesday October 14, Red Sox owner John Henry said: “Bobby Doerr was part of an era of baseball giants and stood out as one himself. And even with his Hall of Fame achievements at second base, his character and personality outshined it all. He will be missed.” 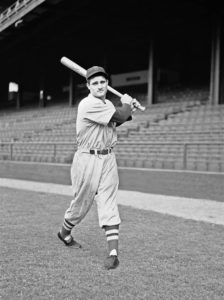 Doerr was signed out of the old Pacific Coast League in 1937, where he had played for the San Diego Padres with Ted Williams, who was signed to the Red Sox out of the same scouting trip. In 1938, Doerr became a regular in the Red Sox lineup as their second baseman. Doerr played 14 seasons with the Red Sox and joined his old friend Ted Williams in the Hall of Fame in 1986. He had a .288 career average, helped the Red Sox to the 1946 World Series, and was a nine-time All-Star.

In 1988, the Red Sox retired his No. 1 jersey at Fenway Park and the team honored Doerr with a 2004 World Series ring after breaking their 86-year championship drought.

Doerr, who was known for being modest, finished his career with 2,042 hits, 223 home runs and 1,247 RBIs. His six seasons with at least 100 RBIs was not matched by another second baseman for 25 years. He was frequently cited one of the best AL fielders.

Doerr’s friendship with Ted Williams, Johnny Pesky and Dom DiMaggio is well known and commemorated in a statue unveiled at Fenway in 2010. He also played on the team with Hall of Famers Joe Cronin, Jimmie Foxx, and Lefty Grove.

Doerr retired to Junction City, Oregon with his wife, Monica Roseman Terpin, and their son, Don. When asked if he wished he played “now,” in 1990, Doerr responded: “No. I know the money is better, but I just feel fortunate to have played then. I think we had more fun. We played the game hard, but there is so much pressure on these guys.”

Bobby Doerr was the oldest living Major League Baseball player and was the last living person who played in the major leagues in the 1930s. We join the baseball community in mourning his passing and remembering his legacy as on of the Red Sox greats from the Golden Age of baseball.

For more on Bobby Doerr and his legacy, see this link.