The Critics Choice Association (CCA) has announced the nominees for the fourth annual Critics’ Choice Documentary Awards (CCDA).
We are thrilled to share that The Spy Behind Home Plate has been nominated for Best Sports Documentary, a category that features 5 other great sports documentaries from the past year.
The winners will be presented their awards at a gala event, hosted by
Property Brothers’ Jonathan Scott, on Sunday, November 10, at BRIC in Brooklyn, New York.
Nominees and industry professionals will be on hand as the CCA honor the finest achievements in documentaries released in theaters, on TV and on major digital platforms, as determined by the voting of qualified CCA members.
2019 NOMINEES FOR BEST SPORTS DOCUMENTARY
Bethany Hamilton: Unstoppable (Entertainment Studios)
Diego Maradona (HBO)
Maiden (Sony Pictures Classics)
Rodman: For Better or Worse (ESPN)
The Spy Behind Home Plate (Ciesla Foundation)
What’s My Name: Muhammad Ali (HBO)
See the full list of nominations here.

The Washington Nationals win the National League Championship and are headed to the World Series! 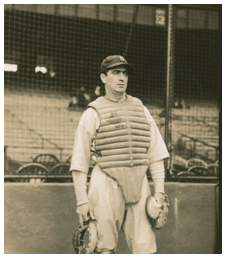 Before they were the Nationals, the Washington baseball team was the Senators.
Spy’s Moe Berg was on the team when the Senators won the pennant in 1933 and went to the World Series.
Good luck to the Nationals!

Walk of Heroes in Detroit

In other baseball news, slugger Hank Greenberg, the subject of Ciesla’s film The Life and Times of Hank Greenberg, is the first honoree in the Walk of Heroes at the former Tiger Stadium, now known as The Corner Ballpark in Detroit, Michigan. The exhibit honoring Greenberg opened on October 3rd.

Read more in The Detroit News. Spy at the Virginia Film Festival

Over the weekend, the Office of Strategic Services (OSS) held their annual William J. Donovan Award Dinner. The Ciesla Foundation worked with The OSS Society on research for Spy. Guests of the special evening enjoyed a screening of the trailer.