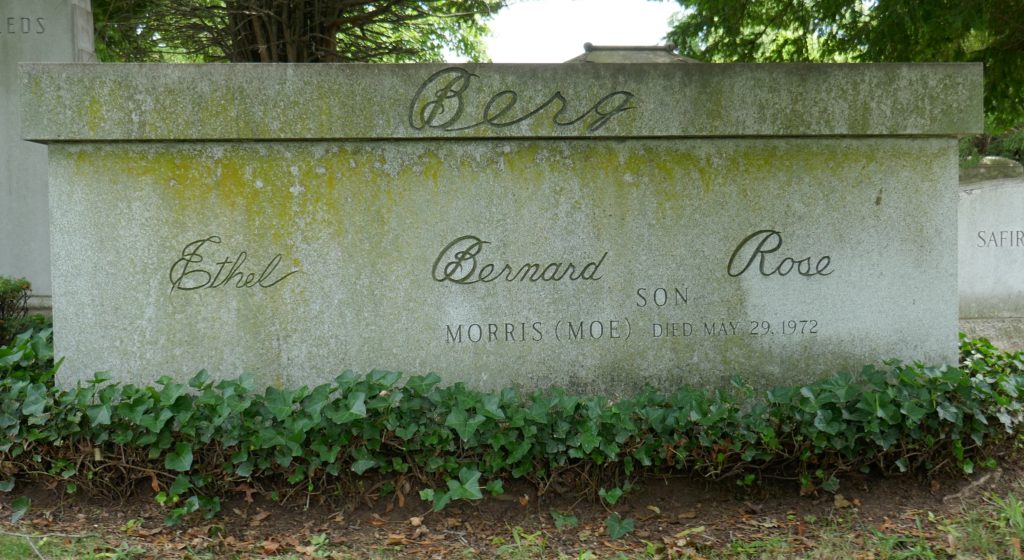 The family plot in Bnai Jeshurun Cemetery includes an inscription for Moe Berg, whose ashes were once interred there. Photo by Tomas Dinges

Award-winning filmmaker Aviva Kempner wants to know: where is Moe Berg’s final resting place? As part of researching her new documentary about Berg, Kempner is currently in Israel trying to solve this final mystery of the man most remembered as the catcher who was a spy.

A Jewish baseball player, Berg caught and coached for five major league teams from the 1920s up until the 1940s during baseball’s Golden Age. But Berg also worked as a spy in Europe, Latin America and Japan for the US Office of Strategic Services (OSS) during World War II. Today he is considered a hero, especially to American Jews.

But Berg’s final resting place has become as mysterious as his double life. After his death in 1972, the urn with Berg’s ashes was interred in the family plot in a Jewish cemetery in Newark, New Jersey. His name was engraved on the stone tombstone. However, at some point his sister Ethel apparently had the urn dug up and took it to Israel in 1974.

One story has Ethel burying her brother’s ashes in a location on Jerusalem’s Mount Scopus, in a grove of trees near Hebrew University. It could even be a location near where now students take breaks between classes. Other reports have his ashes spread over Mount Scopus, and another scenario is that Ethel herself buried the urn with Berg’s ashes somewhere outside Jerusalem. It is believed that a rabbi from an US/Israeli charity she had given money to guided Ethel, but who this rabbi was and the exact location of the burial are unknown.

In yet another version of the mystery, after Ethel’s death in 1987, their eldest brother Sam discovered that his brother’s remains had been moved from New Jersey. He contacted the unknown rabbi and pleaded with him to find the remains.