The mysterious baseball spy Morris “Moe” Berg was born on March 2, 1902.  His parents immigrated to New York from the Ukraine. When Berg passed away in New Jersey on May 29, 1972, he was 70 years old.

Moe caught and fielded for five American baseball teams from the 1920s through 1939 during baseball’s Golden Age.  Berg also had a secret life spying on Japan while participating in an exhibition game and working for the US Office of Strategic Services (OSS) during World War II. He played a prominent role in US efforts to undermine the German atomic bomb program and is now remembered most as the catcher who was a spy. Berg is considered a hero, especially to American Jews. 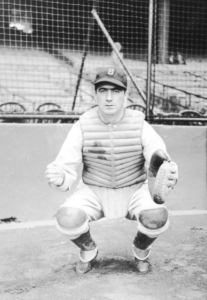 A nurse recalled that his final words were “How did the Mets do today?” But his death was his final mystery and no one knows for sure everything he did during World War II or where his remains are. Although his ashes were buried in a cemetery outside Newark, it’s thought that his sister Ethel dug up the urn and had his ashes spread over Mount Scopus in Israel.  We are trying to uncover that mystery.

Berg declined receiving the Presidential Medal of Freedom in 1945, (his sister later accepted it on his behalf). Later this year he will be receiving the Congressional Gold Medal posthumously along with the rest of the WWII OSS spies.  The event will coincide with the 75th anniversary of the founding of the Office of Strategic Services (OSS).

If you are inclined to raise a glass to toast Berg’s bravery today, we can suggest what to drink. Linda McCarthy, past curator of the CIA museum, reminded me that Pouilly-Fuissé was his favorite wine.

Here’s to Moe, 115 years after he was born, who will finally be celebrated in two films being made this year.

The dramatic film, The Catcher Was a Spy, directed by Ben Lewin, is being shot presently in Prague.  Robert Rodat (Saving Private Ryan) wrote the script that is based on the great bio by Nicholas Dawidoff. Starring Paul Rudd as Berg, the film also features Sienna Miller, Guy Pearce, Paul Giamatti and Jeff Daniels.

Here at The Ciesla Foundation we are making a feature documentary on Moe Berg, another famous Jewish baseball player like the one we featured in The Life and Times of Hank Greenberg.  We are already done with the research and the script treatment.  We expect the film will be out sometime during baseball season in 2018.

Thanks to William Levine, executive producer of the documentary, for making it all possible. Check moebergfilm.org regularly for news about the film.

Just remember Moe played for five baseball teams, but he spied for only one country.  Here’s to you, Moe, on your birthday. 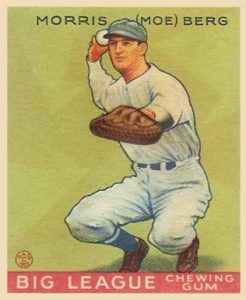 Moe with the Washington Senators in 1933