All the Jewish Major Leaguers to Watch- Baseball 2017 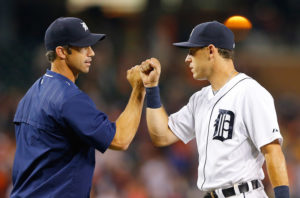 DETROIT, MI – JULY 20: Manager Brad Ausmus #7 of the Detroit Tigers celebrates a win over the Seattle Mariners with Ian Kinsler #3 on July 20, 2015 at Comerica Park in Detroit, Michigan. The Tigers defeated the Mariners 5-4. (Photo by Leon Halip/Getty Images)

(JTA) — In baseball, they say time begins on Opening Day. Everyone has a chance for a fresh start. Most of the old familiar names are back, although some have new addresses. If you count Detroit Tigers manager Brad Ausmus, there are nine Jews who begin the year on Major League rosters. But then there’s the question of what to do about Ty Kelly of the New York Mets: Is he or isn’t he? That’s still a matter of debate among those who decide on such matters.

Read the rest of the article and find out more here.