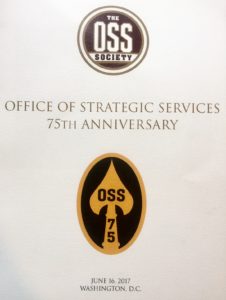 The OSS was created in 1942 by President Roosevelt and was the World War II predecessor to the CIA, US Special Operations Command and the Department of State’s Bureau of Intelligence and Research. The celebration was held at the site of the first OSS and CIA headquarters on Navy Hill, which was recently added to the National Register of Historic places.

Moe Berg served as a spy for the OSS during World War II and was recruited by OSS Director General William (Wild Bill) Donovan.

Read more about the ceremony here. You can link to the OSS society website here.