Frank Monteleone, a radio operative for Moe Berg in Italy during WWII dies at 93.

Our condolences to the family of Frank Monteleone who passed away on April 19th, 2018. Last year in May of 2017, Aviva Kempner interviewed Frank about his time in Rome, Italy during WWII. Frank served as a radio operator for Moe Berg to send messages in code to the Allies. Berg had been sent by the OSS to interview Italian scientists on what they knew about Germany’s effort to develop the atomic bomb.

In his interview, Frank described to Aviva how he had to hide in the attic in an Italian villa with his radio equipment and first translate the messages from English to Italian and send the messages in cypher code to the Allies and then in the reverse when messages came back. Frank told Aviva that Moe Berg was a mysterious man and that it wasn’t until later he learned that Moe was a professional baseball player. 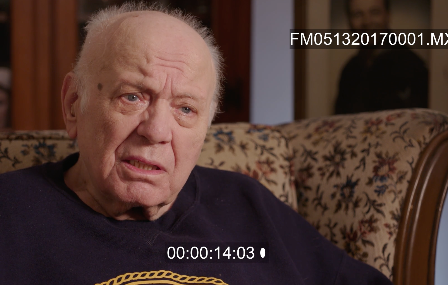 Patrick O’Donnell in Operatives, Spies and Saboteurs describes Frank’s work in the Maritime Unit as part of the Office of Strategic Services (OSS) He writes that “ Frank did it all, parachuting behind the lines, infiltrating by sea on silent motorized floating mattresses, and stealthily collecting and radioing back enemy intelligence.”