On Sunday, May 6, 2018, the Ciesla Foundation screened a work-in-progress titled “Moe Berg: All-Star Espionage?” to a full house at the Edlavitch DCJCC at the 38 th Washington Jewish Film Festival.

The 23-minute clip highlighted Berg’s first trip to Japan with Herb Hunter, Lefty O’Doul and Ted Lyons to teach baseball seminars at Japanese universities and later his return to Japan in 1934 for an exhibition tour with All Stars Babe Ruth, Lou Gehrig, Charlie Gehringer, Jimmie Foxx and Lefty Gomez. The work in progress posed the question of what Berg was doing when he sneaked onto the roof of St. Luke’s hospital to film the city skyline with his Bell & Howell?

A highlight of the morning screening was Aviva Kempner introducing the audience to both Katie Banas, Vernon Louis “Lefty” Gomez’s great granddaughter and Hank Thomas, grandson and biographer of Walter Johnson. 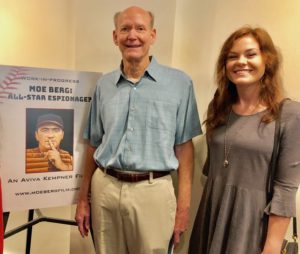 After the screening, director Aviva Kempner, Hank Thomas, grandson and biographer of Walter Johnson, and Intelligence Analyst Richard Willing joined together for a lively panel discussion. Aviva provided a glimpse into additional aspects of the full-length Moe Berg documentary in production and Hank Thomas shared stories of Moe Berg babysitting his mother during Washington Senator ball games. Richard Willing expounded on Moe’s breadth of knowledge and how he seemed to impress everyone he came in contact with. 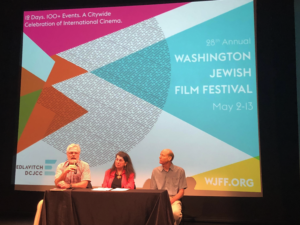 We want to thank everyone for coming! Stay tuned for additional updates