AMERICAN MASTERS: Ted Williams: ‘The Greatest Hitter Who Ever Lived

In anticipation of the documentary “AMERICAN MASTERS: Ted Williams: ‘The Greatest Hitter Who Ever Lived’ airing on PBS tonight (7/23) at 9:00 pm Aviva reminisces on her phone interview with Ted Williams in the making of The Life and Times of Hank Greenberg. 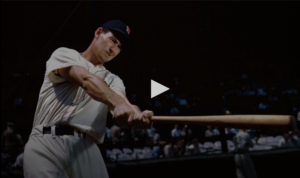 In a bonus feature from Aviva’s The Life and Times of Hank Greenberg Documentary, “Hitting in the Golden Age,” Ted Williams said in his phone interview with Aviva on Hank:

“He didn’t hit those smashing line drives that just got into seats real fast. He was a fly ball hitter. But he hit long flies, and of course you gotta hit a long fly to get a home run. And he was conscious that when he hit the ball good in the air things happened. And I’d be playing deep, and I’d think “this is just a fly,” I got to go back a little more, then a little more, and it kept going and, hell, it’s in the third deck! His ball carried.

Pretty near all hitters, they’ve got God’s gifted ability. They hit the ball, they’ve got that good position, and bam! They’ve got everything going. But what separates a lot of guys that have that ability, and becoming great is their thinking and correcting and making every time at bat or every swing a better one and a corrected swing over the time before. “I got to sharpen up, work it up!”

Greenberg could be struck out. A lot of pitchers used to say, “Just give me a chance, that’s all. All I’ll do is throw a good high, tight fastball. Well I heard them talk about that, but I also saw them when they talked like that there’s another one going on the upper deck, and it might have been a curve, it might have been anything, but he had such good all around power and ability and smarts… and smarts… and smarts, that he just didn’t let them get by with the same thing all the time. And that was one thing, if anything impressed me, was the fact about Greenberg– I knew he was a smart hitter.

Hank was not a real fancy fielding first baseman. He was a big guy, a wonderful target. He was dependable. But hitting is what Hank Greenberg was really renowned for.”

In this bonus feature, Caral Gimbal, Hank’s first wife, also said, “Hank would always tell him, ‘You just have all this natural talent, you run like a gazelle, but why don’t you work on your fielding? You’re a terrible fielder.’ Ted would say, ‘I’m paid for hitting not fielding,’ and he couldn’t care less about the fielding. And they’d have these arguments. He said, ‘Hank, you’re paid for hitting, you’re not paid for fielding.'”